Secular as it is, India is home to many religions and hence is also home to a variety of shrines. Nasiyan temple in Rajasthan is one such shrine which essentially is a Jain temple but instills deep faith and reverence among others also.
Indian Religions : Jain Temples : Nasiyan Temple 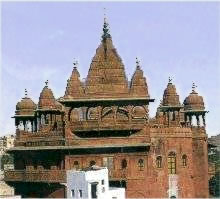 Nasiyan temple is an important Digambar Jain Shrine located in Ajmer, Rajasthan. This shrine, also called Soni Ji Ki Nasiyan, has a very tastefully aesthetic appeal that is Indian to the core. Rajasthan is home to many renowned Jain temples built over the centuries by various Jain devotees. Most of the Jain temples follow Mughal architecture which includes extensive usage of marble, precious metals and gems. Jain temples are known for their splendid carvings, especially on the roof and the pillars, making them a visual treat for the visitors and devotees. Nasiyan temple is one such example of classical Jain style architecture. And just in case you were wondering, the word Nasiyan literally means 'the foot prints of God'. This beautiful temple made of red sandstone is dedicated to first Jain Tirthankara, Lord Adinat, also called Lord Rishabhnath. The temple, made stunning by the extravagant use of precious metals and stones, is essentially a major religious centre and attracts millions of visitors with its divine glory every year.

History
The Nasiyan temple was constructed as an initiative of rich Jain merchants who were particularly interested in constructing temples of excellent architecture. The construction of the Nasiyan Jain Temple took as long as 31 years to complete. Commencing in 1864 AD, the construction went on till 1895 AD which also happens to be the year when the temple was opened for general public.

Major Attractions
The Nasiyan temple is famous for its structure which starts with a huge entrance made of red sandstone typically following the Mughal architecture. Contrasting the modest exterior, the temple's interior is tastefully decorated with precious metals and gems. The main structure is divided into two parts owing to the difference of purposes. The first part is meant for worship and houses an idol of Lord Adinath. The second part is a museum which depicts the entire universe in Jain perspective. The hall with gilded wooden artifacts is embellished with precious metals like gold and silver studded with gems. This hall, known as Swarna Nagri, is also breathtakingly embellished with precious metals, predominantly gold. It houses miniature replicas of all Jain temples in India and other holy places like Ayodhya and Prayag, all plated with gold. It also exhibits the panorama of Jain Mythology.

The inner chamber of the temple is decorated with silver balls hanging from the ceiling. The extensive usage of Belgium stained-glass and mineral colour paintings in the hall offer an idea of just how lavish this temple is. Because of the extravagant usage of precious metals, especially gold, in the interiors, Nasiyan is also called "The Golden Temple".

There is also a museum associated with the temple, which is lodged in the complex itself. The temple has huge fortification around the whole complex which is another common feature of Jain temples built in line with Mughal architecture. It is best to visit this temple between October and March so that you can enjoy your experience without getting bogged down by the oppressive desert heat of Rajasthan.

How to Reach Nasiyan Temple
Jain shrines are all surprisingly beautiful and well-maintained but, the Nasiyan Temple takes this concept to an entirely new level altogether. With its artistic excellence and stunningly embellished interiors, this temple is definitely a sight you would like to remember for good.