Church is the religious place of worship for Christians. Go through this article and learn about the history and types of Christian churches.
Indian Religions : Churches in India 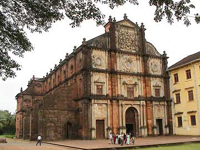 The Church is an edifice where followers of Christianity pray and take the blessings of Jesus Christ and the Virgin Mary. It was during the 11th to 14th centuries that cathedrals and small churches were built within Western Europe. In the earlier days, the church was used as the place for meetings, feasts and to store grain. It was built in a shape of cross, with a dome or a tower. Sometimes, this establishment had a large curved space in the interior side to draw the attention of Paradise. Star shaped churches were built to resemble the light that the church is passing to the Universe. In modern times, a church is built using architectural molds and patterns. In India, it was the Portuguese who initiated the construction of these bodies. Even though there are different kinds of churches and its believers, all Christians follow the holy book: The Bible. On the commemorative days and Sundays, these groups of people get together in a church and pray for the well-being and happiness of each other. This apparently leads to prosperity and pleasure on Earth and in heaven. At the time death, candles are lit and prayers are chanted in the church for peace and bliss of reincarnation of the soul.

Types Of Churches
There are different types of churches which include Roman Catholic Church, Anglican Church, Orthodox Church and Protestants Church. They are known as denominations and each of these churches varies in terms of values and philosophies related to Christianity.

Roman Catholic Church
This is one of the most popular types of church in the world which is looked after by the Pope. The main motive behind these churches is to spread the teachings of Jesus Christ which comprise of rites, rituals and lessons of charity. The Roman Catholics believe that the Catholic Church is the original one founded by Christ and, his disciples/bishops are successors of Christ himself. A large number of people across the globe pray in the Roman Catholic Church. Besides this, there are catholic schools, universities and hospitals.

In this kind of church, the teachings revolve around the 16th century German activist, Martin Luther. These kinds of Christians believe in justification and that human beings are protected from sins by the mercy of God and trust on Him. According to Protestant Church, there are three persons who have made this world i.e. the Father, the Son and the Divine Soul.

Orthodox Church
The Orthodox Church is the second largest in the world with an aim to bring the people closer to God from infancy. The method is known as Theosis where every believer of this church tries to become like Jesus Christ. They believe in the Final Judgment of a person after death and on this day, the soul and the body reunite in heaven.

Reis Magos Church
The Reis Magos is a picturesque village that is situated on the banks of River Mandovi, in Panaji in Goa. This state is well-known for its two big structures, the church of Reis Magos and the Fort. The Reis Magos Church was built on the road which traverses the famous beaches of Candolim and Calangute. This church is the most renowned

Se Cathedral
Se Cathedral is located in Old Goa on the banks of the Mandovi River. It is one of the ancient and the largest churches of Asia which is dedicated to Catherine of Alexandria. It is the church of the Latin Rite Catholic Archdiocese of Goa and Daman, and the seat of the Patriarch of the East Indies. The church is situated on the western side of the main

St. Francis Church Kochi
St. Francis Church is located in Kochi (previously called Cochin). It is one of the ancient European churches in the country and is a marvelous specimen of Portuguese architecture in the country. It is a mark of the colonial struggle of the Europeans to make their presence felt in India at that time. This church, built in 1503 by Portuguese traders,