Sikhism, said to have stemmed from the teachings of Guru Nanak Dev, is based on various beliefs that are quite different from other religions. Read on for more about the Sikh religion and culture.
Indian Religions : Sikhism 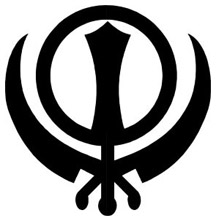 Sikhism, founded about 500 years ago, is a religion which comes from the word 'Sikh' which, in Sanskrit, means a disciple or a student. Sikhs believe in one God and do not practice idol-worship and/or racism. They follow the teachings of their ten masters (called Gurus) and their Holy book, called the Guru Granth Sahib. From 1469 to 1708, the ten Gurus spread a simple message of devotion to God, equality amongst all, trust and honesty. Some major teachings also instruct people to serve mankind, provide food to the starving and lead a charitable and simple life. The place of worship of Sikhs is called a "Gurudwara" which literally means "Door to the Master". Liberal as this religion is, there are no constraints on who can or cannot enter a Gurudwara for blessings. Sikhism also propagates infinite positivity and hopefulness which is why the Sikh-community happens to be a flourishing one worldwide. This religion strictly prohibits consumption of any form of tobacco and opium although these laws are little relaxed with respect to meat and alcohol consumption for most of the Sikhs.

'Guru Granth Sahib', the Holy book of the Sikhs is also known as the final and immortal Guru. The first version of this book, known as the 'Adi Granth', was scripted by Guru Arjan Dev, the fifth Guru of Sikhs. Later, Guru Gobind Singh, the tenth Guru, added more principles, teachings and beliefs to 'Adi Granth' and this final version was called 'Guru Granth Sahib'. It includes Gurubani (teachings of the masters) in the Gurumukhi script and is considered the divine guide for mankind and the chanting of its hymns is known as 'Ardas'.

Founders
Guru Nanak Dev (1469-1539) was the founder of Sikhism and his elder sister Bibi Nanki, was his first disciple. Although, most of the religion is based on what he preached, some influence of Sant Kabir can also be seen on account of the camaraderie that the two shared.

The other 9 Gurus of Sikhism are as:
Brief History
Sikhism Beliefs & Symbols
Current Status
At present time, this religion is spread all over the world and is considered the world's fifth largest religion with more than twenty million followers. Chandigarh, Haryana and New Delhi are the most prominent Indian Sikh cities while United Kingdom, Australia, America and Canada are the most common foreign destinations for them.