Jainism is one of the most peaceful religions. Jains have a staunch belief in non-violence. Read further to know more about Bhagwan Mahavir and Jainism history, temples etc.
Indian Religions : Jainism 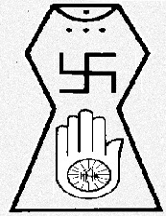 Jainism is one of the most ancient religions that originated in Eastern India and it was founded around the 6th century. The word 'Jain' is taken from the word 'Jina', which means getting victory over thy self and the peripheral world. The Jinas are considered more respectable than the Gods. There were 24 'Tirthankaras' or holy men. Mahavira (599-527 BC) was considered the last in that category and he is also the founder of Jainism. This religion, Jainism, emphasizes on following the path of non-violence. It also believes that the right path can be achieved with the right behavior and self-control. If one wants to meet God, then that soul will have to rule out its negative traits and meditate to become a Jina. One main Jain symbol includes a wheel on the palm of a hand and the other one is a swastika. The holy book of Jains is called the Kalpa Sutra. In this book, all the 24 Tirthankaras and their lives are written about. It has also explained the process of becoming a Jina. There are two different sects of Jains: the 'Digambars', who have one divine mantra known as the Namokar Mantra and the 'Shvetambars', who have nine sacred mantras of worshipping.

All of them meditated in order to detach from the external world and followed the principl of Right perception, Right knowledge and Right conduct. It is believed that these tirthankaras abstained from wearing clothes and considered the 'Universe' to be everything. They said that, every soul is a heavenly body with inborn qualities of vast knowledge, perception, power and bliss. These people also added that every each individual has the capability to achieve divine consciousness (siddha).

There are five levels of reaching Moksha. The first one is the Sadhus (monks) and the Sadhvis (nuns). The second are the Upadhyayas (teachers of scriptures and philosophy); third is to convert into Acharyas (leaders of the monastic community), fourth are the Arihantas (liberated souls that have attained salvation) and the fifth are to become Siddhas (liberated souls who exist in Paradise).

History
The Jainism era was initiated in 300-324 and 324-364 B.C. It spread to the different parts of India within no time. In the South, it developed mainly because of support from the rulers prevalent then. The 8th to the 12th century is considered as the golden period in the history of Jainism. It gained innumerable followers and several temples were also built.

There are three gems of Jainism, namely Right perception, Right conduct and Right knowledge. Jains believe in following the path of non-violence (ahimsa) too. Speaking or even thinking evil is unacceptable, according to this religion. Truthfulness (satya) is the one of the most basic principles to be adhered to. A person must not lie or be untrustworthy. The third pledge is not to steal (asteya), which means you must not take anything without sufficient permission. Celibacy (brahmacharya) is the fourth oath which indicates that control of senses with the mind and defeat your desires. The fifth is non-possession (aparigraha) which means to detach from the external world. It is believed that nothing lasts forever except the inner soul.

The main goal of Jainism is emancipation of the inner soul from all the negative thoughts, speech and action. This goal can only be achieved only through meditation and by following the three gems of Jainism.

After the death of Mahavira, the last Tirthankara, a division took place between the Jain communities. This resulted in two sections of the cast named as the 'Shvetambar' and the 'Digamabar'. It happened as a result of differences in the teachings. According to the Shvetabars, monks and nuns must wear white clothes and also attach a piece of white cloth to their mouths. The Digambars, on the other hand, believed that monks should be naked considering the saying: 'the Universe everything' and a female cannot become a nun as she cannot attain freedom (moksha).

Current Status
Jainism is still prevalent and has profoundly motivated people to follow the truthful path. The Jains have contributed to the moral, political and economic domains in India. They have an old custom of scholarship and also the highest degree of literacy for a spiritual group in India. Majority of Jains in India are set up in Maharashtra, Rajasthan, Gujarat, Ludhiana (Punjab) and Karnataka. Some Jains have also migrated from East Africa to the United Kingdom, United States and Canada.

Pilgrimages
In India, the famous Jain temples are the Dilwara Temples, white marble temples on Mount Abu, Rajasthan, Shravanabelagola, Hassan District in Karnataka with the monumental statue of Jain Saint, Gomateshwara, Ranakpur Temples IN Rajasthan, Palitana in Gujarat, Bawangaja located in Barwani District in Madhya Pradesh, Shikharji in Madhuban, Bihar has a chain of temples on the mountains where all the Tirthankaras got Keval Gyan.

Jain temples are found abroad too. The Jain Centre in Leicester, England is the first Jain temple to be sanctified in a Western country. In Greater Boston situated in Norwood in Massachusetts is the first Jain Center in North America. There is also Siddhachalam in Blairstown, New Jersey, The Jain Center of Northern California in Milpitas, Mahavira Temple in Kobe in Japan and Shree Hong Kong Jain Sangh in Hong Kong.

Festivals
There are four main festivals of the Jains. The first is Mahavir Jayanti, birthday of the 24th Tirthankara, Mahavira. The second is Paryushan Parva, an 8 day fast to follow the 8 important principles; occurring in the month of August. The third is Diwali, which is celebrated as the day of attaining spiritual enlightenment (nirvana) by Mahavira and the fourth one is Kshamavaani, the day to ask forgiveness from all.

Jainism is considered as the first religion that believes in a life of non-violence, as the main principle. According to this religion, the universe is eternal and to meet God, one has to walk the path of honesty, good conduct and non-violence.