The spectacular mosques of India are nothing short of treat for the eyes. To know more on Indian mosques and their historical and spiritual import, trail the write-up.
Indian Religions : Mosques Of India 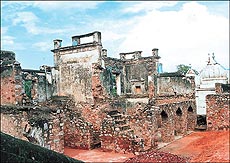 Call it mosque, masjid, or dargah, they all refer to the same thing - 'the dome of Allah'. India is home to a slew of mosques that dots the country's skyline and tots up as a gentle reminder of the country's Islamic past. It's hard to miss the sandstone marvel of Fathepur Sikri or the imposing appeal of Charminar once you step in India. Mosques or 'masjids' revered as the abode of Allah, is the holy place where ardent devotees congregate for salat (prayer). Literally meaning "a place of prostration", mosques are edifices solely dedicated for Islamic worship. However, that is not all. The mosque, apart from being a house of worship, also serves as a hub of information, edification, and quarrel settlement.

India, being a secular country, is home to diverse faiths, which explains why we have a whole slew of mosques and dargahs spread across the territories. Although it is alleged that Islam first spread its roots in India after the Muslim conquest that took place sometime during the 13th century, history traces its existence even before the pre-Islamic era, to the Arab traders and travelers who came to India during the seventh century. Nevertheless, the incursion of Islam in the Hindu-dominated India wasn't easy. In fact, it took several centuries for Islam to spread its wings in India. While some deem it as the result of forcible conversion of people by threat, others see it as the upshot of inter-caste marriages, economic integration, and influence of Sufi preachers.

Every mosque that we see in India has humungous history and significance attached to it. Adhai-Din ka-Jhonpra, located in Ajmer (Rajasthan), melds impressive artistic designs of the Jain temples with the transcriptions of the Holy Quran, which is nothing short of a visual treat. Jama Masjid, the largest mosques in India is the also the last architectural venture of Mughal emperor Shah Jahan. Jamali Kamali Mosque in the Mehrauli village near Delhi is named after the well-known Sufi saint Shaikh Jamali Kamboh and is currently under the jurisdiction of Delhi Archaeological Department. Quwwat-ul-Islam is the mosque, which was erected by Qutb-ud-din Aibak on the ruins of the Hindu and Jain temples, is nothing short of than a lesson in history. Taj-ul Masjid, which literally means ' Crown of the Mosques' is considered as one of the largest and the most fascinating mosques in Asia and is situated in Bhopal, Madhya Pradesh.

Adhai Din Ka Jhonpra
Adhai-din-ka-Jhonpra is one of the classic instances of religious vandalism, an outstanding example of an edifice built over the ruins of Jain temples. This famous mosque, situated on the border of Ajmer, is an inimitable example of primitive Indo-Islamic architecture. Constructed by Muhammad Ghori, Adhai- din-ka-Jhonpra has a slew

Ajmer Sharif
Islamism, Sufism and the Sufi tradition - all of them teaches us one thing - the message of peace, submission, surrender and obedience to Almighty God. Ajmer Sharif, better known to the world as Dargah Sharif of Hazrat Khwaja, is one of the most revered destinations for the theists, the ultimate place for spiritual redemption.

Haji Ali Dargah
Haji Ali is a revered Dargah (tomb) of the Muslims. Located on the brink of the shoreline of Worli Bay, this sacred shrine stands tall amidst sparkling blue sea as a mark of remembrance and reverence to Pir Haji Ali Shah Bukhari (R.A.). The mosque, which is apparently one of the most popular landmarks in Mumbai, was built in the 19th century.

Jamali Kamali Masjid
Jamali Kamali Masjid is put up within the Archeological Village complex in Mehrauli and houses a mosque and a tomb. Esteemed highly for its sanctimonious import, this mosque has been named after the Sufi saint Shaikh Fazlullah, better known as Jalal Khan or Jamali. The identity of Kamali, however, remains shrouded in mystery.

Jama Masjid
Colossal, surreal and beautiful, the mighty edifice of Jama Masjid is impressive enough to make you sit up and take notice of this sprawling edifice. The last architectural venture of Mughal Emperor Shah Jahan, Jama Masjid holds the reputation of being the biggest mosque in India. Located in Delhi, besides the famous Red Fort,

Quwwat-ul-Islam Mosque
Quwwat-ul-Islam is a unique example of the amalgamation of Hindu and Islamic art. The name of the mosque literally means 'Might of Islam'. It is also known as the Qutb Mosque or the Great Mosque of Delhi and was the first to be constructed in Delhi after the Islamic invasion in India. This mosque was built by Qutb-ud-din-Aibak,

Taj-ul-Masjid
Taj-ul-Masjid, which literally means the 'Crown of Mosques', is one of the largest mosques in Asia. Spread across a sprawling campus, this imposing 'dome of Allah' is situated in Bhopal, the capital city of Madhya Pradesh. This pink edifice, embellished with white-dome minarets, is indeed a treat for every eye. Although Sultan Shah