Taj-ul-Masjid holds the status of being one of the largest mosques in Asia. To know more about the history, significance, and major attractions of this mosque, read on.
Indian Religions : Muslim Shrines : Taj-ul-Masjid 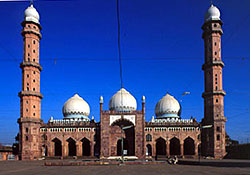 Taj-ul-Masjid, which literally means the 'Crown of Mosques', is one of the largest mosques in Asia. Spread across a sprawling campus, this imposing 'dome of Allah' is situated in Bhopal, the capital city of Madhya Pradesh. This pink edifice, embellished with white-dome minarets, is indeed a treat for every eye. Although Sultan Shah Jahan, Begum of Bhopal pioneered its construction, it couldn't be accomplished due to dearth of funds. Years later, at the strong initiation of Allama Mohammad Imran Khan Nadwi Azhari of Bhopal, the mosque was finally completed in 1971. Result, a rambling, gorgeously ornated mosque. During the day, this mosque serves as a 'madrasah'. Besides this, every year a three-day congregation known as Aalmi Tabligh Ijtima is held in the premises of the mosque, which is attended by the devotees from all around the world. At present, the congregation is held in Gazi Pura, a place in the outskirts of the city because of the shortage of room in the mosque.

Brief History
Although the construction of the mosque was commenced during the rule of Sultan Shah Jahan Begum, it was completed years later in the year 1971 at the strong initiation of Allama Mohammad Imran Khan Nadwi Azhari of Bhopal. This mosque is somewhat similar to that of Jama Masjid in New Delhi and the Badshahi Mosque in Lahore and reflects the grandiosity of Mughal architecture in terms of its construction. Taji-ul-Masjid is spread across a rambling 23,312 sq. feet with the minarets being 206 feet high. It has three big round-shaped domes, a beautiful prayer hall embellished with beautifully carved pillars, marble flooring, two eighteen storeyed minarets and marble domes. Apart from this, there is a courtyard with a big tank in the center and a double storied gateway with four curved cloisters and nine cusped multifold openings in the main prayer hall. Furthermore, the main wall of the prayer hall is engraved with latticework and sunken curves. The twenty-seven ceilings are clamped with huge pillars, which are embellished with trelliswork. Amongst the twenty-seven ceilings, sixteen are embroidered with floral designs. What's more, the crystal slabs used for designing of floor were imported from England for whopping seven-lakh rupees.

Major Attractions Of The Shrine
The sprawling size of the mosque is its biggest attraction. The pink façade and big white domed minarets fascinates people with its mesmerizing beauty and the marble flooring with crystal slabs and the arches decorated with beautiful designs just adds to its appeal. The huge entrance that somewhat looks like Buland Darwaza, captivates visitors. Other attractions of this place include a large prayer hall, huge carved pillars and exquisitely done ceilings.

The most favorable time to visit the shrine is from October to March as the temperature is agreeable.

How To Reach The Shrine

By Air:
The Raja Bhoj Airport, which is the main airport in Bhopal, is 15 kms away from the main city and is well connected to the cities of Delhi, Indore, Gwalior and Mumbai. There are international flights from Gulf cities like Sharjah and Dubai. Taxis are easily available from the airport to the shrine.

By Rail:
Bhopal is well connected through trains to all big cities in India. It is a major rail route in Mumbai-Delhi broad gauge. From the station, you can hire a taxi or an auto-rickshaw to reach the pilgrimage.

By Road:
There are both public and private bus facilities in Bhopal. All the major cities are linked by road. There are overnight deluxe buses available from Delhi, Gwalior and Jabalpur to Bhopal.

Taj-ul Masjid is one of the largest and impressive mosques in India and is famous for its beautiful architecture, which is a true specimen of Mughal taste and style. It is, in fact, one of the biggest landmarks of Bhopal.