Amarnath yatra is one of the most important Hindu pilgrimages. Known for its natural existence and ancient roots, Amarnath pilgrimage is a pious and picturesque journey to the valleys of Kashmir.
Indian Religions : Indian Temples : Amarnath 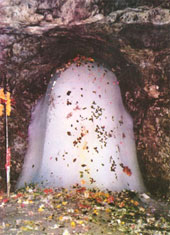 Amarnath Temple is a sacred Hindu shrine located in Kashmir and surrounded by beautiful Himalayan valleys. This ancient cave temple, dating to more than 5000 years ago, is devoted to Lord Shiva-one among the Holy Trinity of Hinduism. The temple is situated on Mount Amarnath which is about 141 km away from Srinagar-the capital city of Jammu and Kashmir-and is seated at an altitude of 12,750 ft. above sea level. Thousands of pilgrims from places across India and the world visit this holy shrine every year, seeking salvation and inner peace. Amarnath is famous for a natural ice stalagmite which resembles the holy Shiva Linga. This natural Shiva Linga is formed when water droplets trickling down the Amarnath cave, freeze under the extreme low temperatures during the months of May to August. The structure thus formed is a white Shiva Linga which, after reaching its height in the summers, gradually melts away after August. Pilgrims to this cave can watch the water droplets fall, freeze and contribute to the growth of this holy stalagmite while it attains its maximum size.

History
Amarnath temple is a cave situated in the Himalayan ranges. It is believed that Lord Shiva explained the secret of life and eternity (Amar Katha) to his wife Goddess Parvathi here. He wanted an isolated place for this discussion hence he stationed his vehicle Nandi (bull) at Pahalgam, Snake at Sheshnag (the lake), Lord Ganesha (his son) in Mahaguna hills, the moon at Chandanwadi and the five elements of life at Panjitarni to block any creature from reaching the cave. After ensuring that no one is around, Lord Shiva revealed the Amar Katha to Goddess Parvati. However, a pair of doves abiding in the cave overheard the secret lessons. It is believed that after hearig the secret the doves became immortal. A pair of doves that dwells in the cave is said to be the same one.

There is an interesting story regarding the discovery of Amarnath cave. A shepherd called Buta Malik once met a sage who gifted him a bag full of coal. Buta Malik, on reaching home, discovered that the entire mass of coal in the bag was replaced by gold. He understood that the sage was not an ordinary person and ran back to thank the sage at the same place they had met. However, on reaching there, he found a cave with a stalagmite Shiva Lingam instead of the saint. Buta Malik announced his discovery among the villagers and that's how it baceme famous.

Hindu epics narrate another story of this cave's discovery. It says that once when the Kashmir valley was submerged under a big lake, Sage Kashyap drained all the water through several rivers and streams. Once the valley was restored, Sage Bhrigu, on his visit to Himalayas, discovered this holy cave.

Major Attractions
The cave is situated in an exotic location in the Himalayan ranges. The major attraction of this place is obviously the natural Shiva Linga which is formed every year and is said to melt according to the stages of the moon. There are two more stalagmites near the temple which represents Goddess Parvathi, wife of Lord Shiva and Lord Ganesh, their son. Other two major tourist attractions near Amarnath, Pahalgam and Sonmarg, are also famous and are usually crowded with pilgrims and tourists in the peak season. Pahalgam is a picturesque place seated at a height of 2133 metres in the Himalayan range. The exotic beauty of the place is intensified by the presence two rivers - Aru and Sheshnag.

The presence of the Sindh River with a backdrop of snow covered mountain ranges adds heavenly beauty to this scenic piece of land. Summer season, between April to October, is the ideal time to visit Amarnath. There are both government and private organized Amarnath Yatra Packages that can help you with a better organized pilgrimage.

How To Reach
Located in the lap of the Himalayas, Amaranth is a bit arduous to reach. The nature of the terrain makes it impossible to construct roads and rails in the snow-toped areas around the cave. However, the roads takes you to the nearest possible point from where either you can walk or take pony-rides to the main temple. Pilgrims can reach Amarnath in the following ways.
Amarnath, the famous Hindu shrine is different from other shrines in terms of its location and the structure of the journey. The trip is a truly mystical and divine experience.