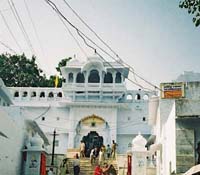 The famous Hindu shrine dedicated to Jagatpita (Father of the world) Brahma Mandir is situated at Pushkar, in the state of Rajasthan, India. The temple is dedicated to God Brahma, the Creator-the foremost in the Holy trinity of Hinduism. Despite being one of the important deities of Hinduism, there are very few temples dedicated to Lord Brahma with the one in Pushkar being the most important. The temple itself is believed to have been established 2000 years ago however, the present structure made of marble and stone dates back to the 14th century. This temple consists of a life sized idol of Lord Brahma with four hands and four faces-each head facing to a different direction. The wall of the temple is adorned with the peacock images, which is said to be the vehicle of Goddess Savitri, the wife of Brahma. While the rest of the temple floor is inlaid with a number of silver coins as an offering to Brahma, the main section's has a silver turtle embossed on it. Scroll down to read more about this temple!

History
The Jagatpita Brahma temple is believed to be founded 2000 years ago, in Pushkar which is famous for the multitude of temples numbering up to 500. The temples in this region were subjected to destruction and demolition during the reign of the Mughal emperor Aurangzeb and Brahma temple was one among them. Therefore, many of the temples in Pushkar, including the Brahma temple, were rebuilt above the ancient structures. Hence, the discrepancy between the founding dates.

It is a popular belief that this temple was constructed by sage Vishwamitra after Brahma Himself suggested the location. It is believed that Shankaracharya, the famous Hindu philosopher of 8th century, visited this temple and led the renovation. Some more additions and repair works were done during the rule of Maharaja Jawat Raj of Ratlam and the original design was retained.

Legend has it that once Brahma slew a deadly demon with his lotus-flower. In the process, three petals of the flower fell on the earth and he decided to have a Yajna (fire-sacrifice) at the place where the petals fell. Brahma named this place 'Pushkar' and set up mountains on all four sides so that the demons could not disrupt the Yajna proceedings. He sought to start the Yajna as soon as possible but was getting delayed because his wife, Savitri, could not be present on the designated time. Enraged by this delay, he married a local Gurjar (Gujjar or Gujar) girl, Gayatri, to ensure that the Yajna proceedings started in time. It is said that while the Yajna ceremonies were being held, Savitri arrived to see her husband Brahma making offering with his new wife. Thus livid with anger, Savitri cursed Brahma that he shall not be worshipped anywhere else in the world except Pushkar and angrily stomped away to make herself an abode in the nearby hills where a Savitri temple now stands.

Major Attractions
The temple is built on a raised platform with many marble steps to reach the height. The entrance of the temple is embellished with pillared canopies which lead to the sanctum sanctorum (or 'Garbhagriha'). It is believed that the reverend Guru Sankaracharya deified the marble idol of Brahma. Temples of both Savitri and Gayatri (Brahma's wives) are located nearby on top of two different hills facing each other. The Apteshwar temple of Lord Shiva, is situated in a cave near the Brahma temple and is believed to have been founded by Lord Brahma himself.

How To Reach
Brahma temple in Pushkar holds a special place among Hindus all over the world. Despite the other temples that have come up, this ancient structure has retained all this glamour and religious appeal.