Chamunda Devi is one of the most revered Goddesses in Hinduism and the Chamunda temple in India is a very prominent religious shrine. Read on for more on this very famous Hindu temple in India.
Indian Religions : Indian Temples : Chamunda Temple 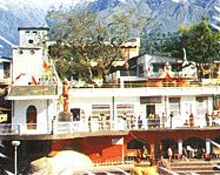 Chamunda Devi Temple is located in the state of Himachal Pradesh, India. It is a famous Hindu shrine dedicated to Goddess Chamunda, which is just another aspect of Goddess Shakti bodied fearsomely and created with the sole purpose of eradicating all evil from earth. The shrine is very strikingly seated in beautiful surroundings and is located 1000 metres above sea level. It provides a good view of the surrounding mountains, forests and the rather untamed natural beauty. This makes this place ideal for meditation and you can see many sadhus meditating in the temple premises. It is located on the banks of the holy river Baner (Ban Ganga) where devotees worship and give offerings for their ancestors. It is believed that even a single dip in this holy river can revive and free you from all sins. Read on to know more about this shrine!

History
Chamunda is a fearsome aspect of Goddess Shakti and was enshrined as Chief Goddess with the title of 'Rudra' in the battle between demon Jalandhra and Lord Shiva. Chamunda is believed to have emerged from the eyebrow of Goddess Kaushiki and was given the task of eliminating the demons 'Chand' and 'Mund'. She, after accomplishing the mission, went to Goddess 'Kaushiki' along with the slain heads of both demons. Pleased at the victory, Goddess Kaushiki blessed and bestowed the title of 'Chamunda' upon her. The name Chamunda is a combination of two name Chanda and Munda, the demons killed by her.

Chamunda Temple also has a legend associated with it. The original Chamunda temple, which is believed to be more than 700 years old, was located in some other dangerous remote location, making it almost impossible for the devotees to reach. It is said that 400 years ago, the king of this region and royal priest of his kingdom prayed to the Goddess Chamunda asking permission to relocate the temple to an easily accessible place to which the Goddess agreed. She asked the priest and asked him to use an ancient idol in the new temple and directed him on how to get that old idol. Next day, the priest himself went there, bowed in a respectful manner and lifted the idol and installed it in the newly constructed temple.

Major attractions
The Chamunda temple is constructed near the Baner (Ban Ganga) river where an artificial lake was built right next to the temple. This lake is always filled with water from the Ban Ganga and houses artificial sculptures of Goddess Saraswati, a lion and swans. Scenes from epics like Ramayana, Mahabharata and Devi Mahatmya (Supremacy of the Goddesses) are depicted on the walls of the temple. The main deity, of the temple, Chamundi Devi is kept covered under a red cloth while the sanctorum is covered with inscribed silver sheets with images of Hanuman and Bhairav kept on either side of the main deity. A cave behind the temple also houses an ancient Shiva Linga.

How To Reach Chamunda Temple
There are other Chamunda temples in India, but the one near Dharamsala is the one best-known and has unique mythological importance.