Situated in the caves of Jammu & Kashmir in India, the temple of Vaishno Devi Maa is a major Hindu pilgrimage. Read the following section for its rich history and legacy.
Indian Religions : Indian Temples : Vaishno Devi 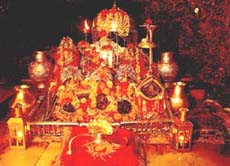 Shri Mata Vaishno Devi is one of the most important Hindu shrines in the world receiving more than 8 million devotees every year The temple, located in the picturesque hills of Jammu & Kashmir in India, is a cave temple seated at an altitude of 5200ft in a three-peaked mountain known as Trikoot. It is near a small town called Katra from where it is a 14km trek to the main shrine. Although most devotees prefer trekking on-foot, convenient methods like mule-rides, helicopters and Palkis (Palanquins) are also made available to elderly people, children and others who need help trekking. The temple is maintained by the "Shri Mata Vaishno Devi Shrine Board". Recent surveys suggest that Mata Vaishno Devi Temple is the second most visited religious shrine in India-the first being Tirumala Venkateswara Temple in Andhra Pradesh. It is believed that not everybody can visit Mata Vaishno Devi (also called Mata Rani) and whether or not you're able to visit the shrine depends upon Mata's wish to have you there. Supported by strong faith and deeply religious backdrop, pilgrimage to Vaishno Devi temple truly becomes an unforgettable chapter in one's life. Read on to know more on this shrine.

History
There are many legends associated with the origin of this temple. According to Mahabharata, Arjun, the third Pandava, meditated and prayed to the Goddess to seek her blessing for victory in the Kurukshetra Battle. It is believed that the place "Jamboo" referred in Mahabharata denotes the current-day Jammu where this temple is situated. The Pandavas are then said to have made this temple as a token of reverence and gratitude for her blessing due to which they emerged victorious in the Battle of Kurukshetra.

The second legend is associated with Lord Shiva's first wife Sati, who, unable to bear the insults that her father, Daksha, called to Lord Shiva, immolated herself in grief. It is said that on intimation of Sati's (or Gauri's) immolation, Lord Shiva went crazy with rage and carried her charred body, on his shoulders, around the world. It is believed that Sati's body parts fell in over 51 places on earth and each of these places became a Shakti Peetha (or Source of Power). Vaishno Devi is the temple dedicated to the most important Shakti Peetha as this is where Sati's head is said to have fallen.

The discovery of this cave takes us to another interesting story. This cave is believed to be discovered 700 years ago by a Pandit called Sridhar, who was a staunch devotee of Goddess Shakti (meaning Power, a common name for all Hindu Goddesses). It is said that Vaishnavi (or Mata Vaishno Devi) appeared to Sridhar in his dream and asked him to arrange a Bhandara (distribution of food) at his place. Perplexed at the lack of provisions and place for the invitees, Sridhar was assured by the Goddess that everything would be taken care of. And true to her word, Mata Vaishno Devi made sure that everybody had their choice of food. Later, Vaishno Devi reappeared in Shridhar's dream and gave him direction to her temple in the caves. Thus, Pandit Sridhar discovered the holy cave and spread the glory of Mata Vaishno Devi to the rest of the world.

Another legend goes that as Mata Vaishno Devi, after providing for the Bhandara at Pandit Shridhar's hut, was returning to her caves when Bhairav Nath, one of the invitees, followed her to see where she gets her powers from. He pursued Mata for nine months after which she appeared to him in her Goddess form. Bhairav Nath immediately attacked Mata in an attempt to gain salvation by dying at her hands and Mata immediately beheaded him. Bhairav, whose head fell about 8 km downhill from Mata's temple, begged for forgiveness from Mata who then gave him a boon that his temple would be created where the head has fallen. She also declared that the pilgrimage of Vaishno Devi will not be considered complete if the devotees do not visit Bhairav's temple after visiting Devi's temple.

Major Attractions of Vaishno Devi Temple
At the heart of the Vaishno Devi Temple is a natural cave with three heads or Holy Pindies. Being situated on a height, this shrine offers a plethora of natural splendours to all the visiting devotees. To reach the sanctum sanctorum, pilgrims have to walk through a cold stream of Charan Ganga and around steep valleys. The narrow cave also houses rock-idols of Goddesses Mahakali, Mahalakshmi and Mahasaraswati with gold and silver canopies. There is also a Bhairav temple near the Vaishnodavi temple and it is obligatory to visit this temple after visiting the main shrine to make the pilgrimage complete.

Pilgrimage to this shrine during winter is dangerous as the upward routes are blocked by snow. The best time to visit this shrine is the summer season. The route to the shrine is electrically well-lit and comfortable accommodation facilities are also available in the temple complex.

How to Reach Vaishno Devi Temple
The Vaishno Devi temple has close association with the beliefs of the Hindus and its inherently feminine nature is a tribute to the ancient Hindu belief of supremacy of women.