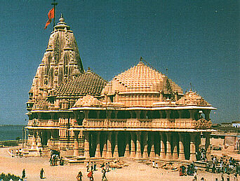 Somnath, home to the 'Aadi Jyotirling Sri Somnath Mahadev', is a holy place for Hindus. Although Somnath literally means "The Moon God", this shrine is actually dedicated to Lord Shiva and is believed to be home to one of the twelve Jyotir Lingas. Somnath is located on the western cost of India, near Veraval in Gujarat. The Jyotir Linga at Somnath is believed to be the Swayambhu (or Self-born) and is therefore considered the primary or the first Jotir Linga. This ancient shrine is mentioned in various Hindu scriptures like Skandapuran, Sreemad Bhagavat Geeta, Shiv Maha Puran etc. It is said that this shrine has been destroyed six times by Muslim invaders but every time, it has been successfully re-built giving it the name of "The Shrine Eternal"; the last re-building happened in 1947. The sheer faith and fame of this temple attracts millions of pilgrims every year who find this place always resonate with Shiv Bhajans all round the year.

History of Somnath
The legend of Somnath is associated with Moon and Lord Shiva. It is said that the Chandra (Moon) married the twenty-seven stars, who were the daughters of Prajapati Daksh. Chandra had a special affection for Rohini which didn't go well with his other wives, the sisters of Rohini. Unable to bear this discrimination, the 26 sisters went to their father Daksh to complain. Unhappy with the proceedings, Daksh spoke to Chandra with the intent of convincing him to change his behaviour but could not succeed. Thus enraged, he cursed his son-in-law to lose his Kala (Art) every day and decrease in size till he becomes invisible. Aghast and grief-stricken, Chandra was counseled by Lord Brahma, the creator, to worship Lord Shiva for a way out of the gruesome curse. Chandra meditated and prayed to Lord Shiva for six months, at the end of which Lord Shiva gave him the boon that after reducing in size for the first half of the month, Chandra would grow back size in the other half of the month and become its original full self on the full-moon day. The place where moon worshipped Lord Shiva is known as Somnath which means the 'Moon God'. It is believed that the moon is the brightest in Somnath. The pool (Kund) at Somnath is believed to be created by the Devas and hence, devotees believe that single dip in this pool can wipe away all their sins.

It is also believed that the Lord Shri Krishna took his last journey to Neejdam, which adds to the holiness of this land.

The Somnath temple was attacked by Muslim invaders as many as six times but was successfully rebuilt each time. Junamad, the Sindh Subedar was the first invader to attack Somnath in the year 722. There was a marvelous magnetic statue in Somnath temple which had miraculous power associated with it. Ghajni Mohammed, another invader, destroyed this wonderful statue in 1025 AD. This incident made him notorious as an iconoclast. In this attack he looted about 18 crores worth of treasure from the temple.

Major Attractions
The Somnath temple is an ancient temple with many legends associated with it. The original structure on the sea shore is believed to have been built in 4 phases. The one in gold is believed to be built by Lord Som (Moon God), the silver one by Ravi (Sun God), the wood one by Lord Krishna and the stone one by King Bhimadeva. After repeated demolitions, the current structure is built in the Kailas Mahameru Prasad in Chalukya pattern of temple architecture. It reflects the matchless skills of the Sompuras who are the master-masons of Gujarat. The temple has shikhara, Garbhagriha, sabha mandap and the nritya mandap. The geographical positioning of Somnath temple is such that there is no land between it and the continent of Antarctica.

Due to the belief that moon is brightest in this place, it is also known as Prabhasappatana. This sacred temple is visited by millions of tourists every year. There are many other attractions near this ancient temple including Somnath Museum, Somnath Beach, Junagadh gate, Bhakta Teertha, Akhilabai temple and Mai Puri; all these make Somnath pilgrimage truly unforgettable.

How to Reach Somnath
Somnath is an important Hindu shrine because of its mythological and historical importance. The temple, which withstood many brutal demolitions, is now the symbol of the social unity in India.