Kedarnath is another major Hindu pilgrimage dedicated to Lord Shiva. Every year, Kedarnath Yatra is undertaken with religious fervor and faith. Read on to find out why this temple is regarded the way it is.
Indian Religions : Indian Temples : Kedarnath 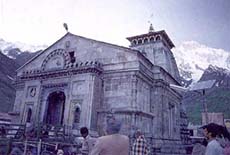 Located 3584 metres above sea level, Kedarnath is a scenic small town in the Himalayas and lies in the state of Uttarakhand, India. Being a part of the Chota Char Dham (Mini Four Abodes, a form of Hindu Pilgrimage), Kedarnath temple is held in very high regard and reverence by the Hindus. Owing to its scenic beauty, Kedarnath attracts many travellers and adventurists from all over the world. The difficult hilly terrain makes it a favorite destination for trekking and other adventurous sports while its snow-covered peaks, rushing rivers and many Kunds (pools) of religious significance give it an aura of spirituality and faith. The journey to Kedarnath is a wonderful experience and with the River Ganges flowing along the road, following you up to the holy land, it becomes even more revered. There are more than 200 shrines dedicated to Lord Shiva in this region but the most important is this Sri Kedarnath Temple which has a rich history attached to it. Read on to learn more about this humble, yet highly holy, abode of Hinduism.

History
According to the legends associated, this place derived its name after the Satya yuga king, Maharaja Kedar. It is also believed that his daughter Vrinda was a partial incarnation of Goddess Lakshmi.

Kedarnath shrine also has a legend associated with it, which connects the place to the Hindu epic, Mahabharata. After returning victorious from the Kurukshetra battle, the Pandavas, guilt-ridden of killed their own brothers, worshipped Lord Shiva for redemption but he kept evading then. Realizing that the Lord is hiding from them, the Pandavas started searching for him around the Himalayas and reached Gaurikund, where they saw a unique bull. Bhima, the strongest of all Pandavas, went with his mace to catch the bull and hit it on its back. Consequently, the bull hid its face in earth and as Bhima started to pull it out, a tug-of-war ensued. Sometime later, a holy Jyotirlinga appeared from the hindmost part of the bull and showed Lord Siva to the Pandavas. He absolved the brothers from their sins. Since then, it is believed that the back part of Shiva lies in Kedarnath as Kedareshwar. This temple, believed to be built by the Pandavas, is about 10000 years old while the new temple, located near the old temple, was built in the 8th century under the initiative of the famous Hindu philosopher, Sri Shankaracharya.

Another legend associated with Kedarnath is that of Nara and Narayana, the two incarnations of Lord Vishnu, who practiced severe penances here. After testing them for long, Lord Shiva finally appeared before them. They requested him to take up a permanent abode in the form of a Jyotirlingam in Kedarnath and bring about prosperity to the whole world.

Major Attractions
Located in the lap of Himalayas, Kedarnath offers many attractions to an enthusiastic traveller or a pilgrim.
The ideal time to visit Kedarnath is from May to October, except Monsoons. The temple remains closed during winters due to heavy snowfall and landslides are very common in monsoon which can further disrupt the journey.

How To Reach Kedarnath
Kedarnath is one of the most important Hindu shrines with great mythological importance. It is mentioned in epics and many other religious scriptures with great reverence and is considered as a spot for salvation.